Note: Hard disks are not automatically mounted in rescue mode. To access the data on the hard disks, they must be mounted beforehand.

You can see here that two hard drives are installed:
/dev/sda -> first hard disk in the system
/dev/sda1 and /dev/sda2 -> two partitions

In addition, the "System" item shows what type the partition is.

Linux Swap
Linux swap refers to the swap partition in which the operating system can swap data.

Linux nativ / Linux
These partitions usually contain a Linux file system with data that can be mounted.

Linux raid federation
These partitions are part of a Raid network. This will be discussed in more detail below.

To mount a partition, the command "mount" is used: (In the example the partition /dev/sda2 is mounted Linux native).

Here the partition is now mounted in the directory /mnt. Afterwards you can change into the directory and display data, as well as copy.

The procedure for mounting the hard disks differs for a raid group.

The command "fdisk -l" reads out the hard disks and their partitions: (Raid 1 from two hard disks) 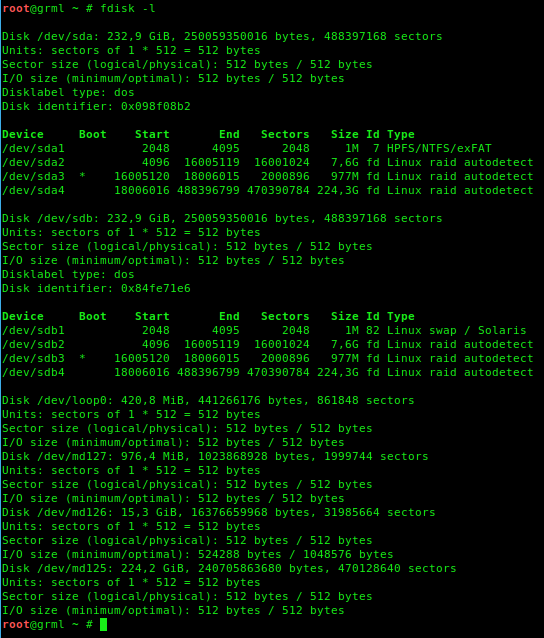 Both hard disks /dev/sda and /dev/sdb, as well as their partitions are now visible here. In addition, other "disks" and their sizes are listed:
/dev/md127
/dev/md126
/dev/md125
Here we are dealing with the raid partitions. Since /dev/md125 is the largest raid in the array and most likely contains the data, this is mounted to /mnt :

The contents of the hard disk are then accessible under /mnt. You can now perform work on the system or make a backup via SCP.

Please note that the rescue system remains active until you deactivate it in the customer interface and restart the server.